At its June 28th meeting, the Georgia Cotton Commission approved its budget for fiscal year 2018 (FY18) that starts July 1st. Along with supporting cotton industry organizations such as the National Cotton Council and Southern Cotton Growers, the FY18 budget includes $645,000 for cotton research. These research projects cover all aspects of cotton production including cotton breeding, variety testing, weed science, entomology, pathology, and engineering. The Commission’s research program also includes a grant for continued support of the UGA Cotton Team’s extension activities. A list of current and past research projects can be found on the Commission website at www.GeorgiaCottonCommission.org.

Also at its June 28th meeting, the Commission elected Bart Davis of Colquitt County as Chairman and Matt Coley of Dooly County as Vice-Chairman. Davis, who was first appointed to the Board in 2012, succeeds Mike Lucas of Bleckley County who has served on the Commission’s Board since 2003 and as the Board’s Chairman since 2013. Coley, also appointed to the Board in 2012, succeeds Lee Cromley of Bulloch County who has served as a Board Member since 2011 and as Vice-Chairman since 2014.

Bart Davis operates Davis Farms, a cotton, peanut, corn, hay, and cattle operation, with his wife, daughter, and two sons. Davis is a longtime supporter of FFA and holds a State FFA Degree as well as being named Georgia Star Farmer. Davis has also been named Farmer of the Year at the Annual Peanut Festival in Sylvester. In addition to serving as the Georgia Cotton Commission’s Chairman, Davis serves as a Delegate to the National Cotton Council, a Director for Southern Cotton Growers, and as an Alternate Director for Cotton Incorporated.

Matt Coley is the fourth generation to operate Coley Farms, a cotton and peanut farm, and Coley Gin & Fertilizer, a cotton gin and peanut buying point in Vienna. After college, Coley served on the staff of Senator Saxby Chambliss, who was Chairman of the Senate Committee on Agriculture, Nutrition, and Forestry. In addition to serving as the Georgia Cotton Commission’s Vice-Chairman, Coley serves as a Board Member for the National Peanut Buying Points Association and as Director for the American Cotton Producers of the National Cotton Council. Coley was a member of the Leadership Georgia Class of 2016.

Below: Past Chairman Mike Lucas (left) accepts a cotton print from incoming Chairman Bart Davis (right). Lucas has served on the Georgia Cotton Commission since 2003 and as Chairman since 2013. 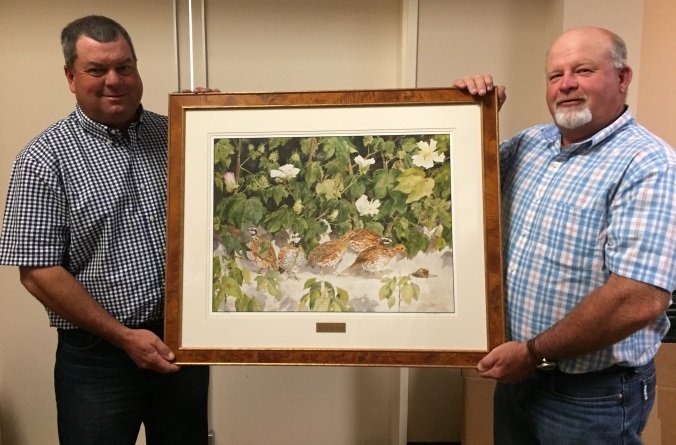